Can the Family Dog Learn to be a Farm Dog?

Our family dog is also our farm dog, after careful training. We enjoy spending time with him while we tend to the livestock on our farm. The dog has naturally learned some things about life on the farm, such as which poop tastes the best, and where to sit to get the leftover cat food from the can. But most of the safety behavior and manners the dogs  exhibit has been taught.

Starting at a young age, while on a leash, we introduce the puppy to the animals. Many times it is a less than friendly greeting, such as when the horse tries to kick or the cat decides to bat the puppy with her claws. 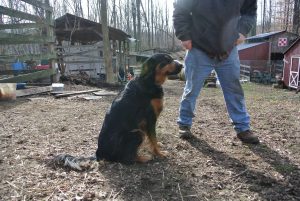 If left to their own choices,  the dogs would run the animals into  the ground. Prior to learning how to be a  farm dog, our Labrador Retriever  would run the ducks back and forth in their habitat. He couldn’t get to the ducks but he would bark through the fence and make the whole experience noisy and unpleasant. With firm training and the use of a long lead line, the dog eventually learned what behavior was tolerated on the farm. He has become a good farm dog. He learned that these other animals are cared for by us, his pack leaders. Chief learned that his job was to be vigilant, chasing off any harmful visitors and helping us keep the livestock in certain areas.

The goats and Chief are about the same age. I doubt either remembers a time that the other was not here on the farm. After being brought up with Chief, the goats treat him as one of the herd. It took the sheep a little longer to become comfortable with Chief. He never lunged at them and always seemed very comfortable with them grazing around him. Except for one time when one of the sheep got really close. They invaded Chief’s personal space and he barked as he had to get up and move away. 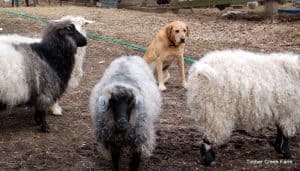 He basically ignores them and they go about their business grazing and foraging.

Two years ago a new puppy joined the family.The goats were wary of this bundle of puppy energy. The puppy just thinks they are playmates! With firm handling and calm discipline he also has learned to behave a certain way around the farm animals.

For times when a duck or chicken escapes their run area and may encounter one of our dogs, we introduce them and lay the ground rules with the dogs. I have found that their is less frantic chasing and running around if I show the puppy the chickens in a controlled hold. They get the opportunity to sniff while I talk softly and let them know that this is ours. After a few controlled encounters, I have had no more incidents of chasing escaped chickens. Instead, after some more training, Chief will help me round up the chickens  and circle them calmly back into the run. 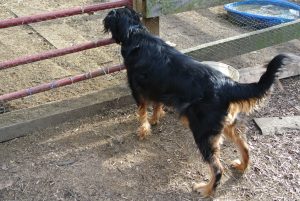 Jackson has learned to stay by Farmer Chris or he must remain in the fenced yard. He is gentle with the chickens although he does feel it’s his job to “shepherd” them back to their pens. 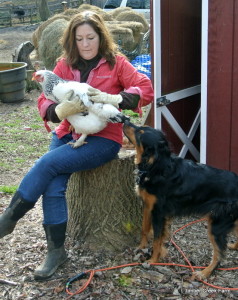 Now it is time for Walker to learn the farming routine. He recently had his first chance to kiss a duck! 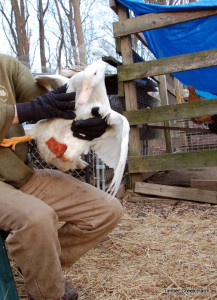 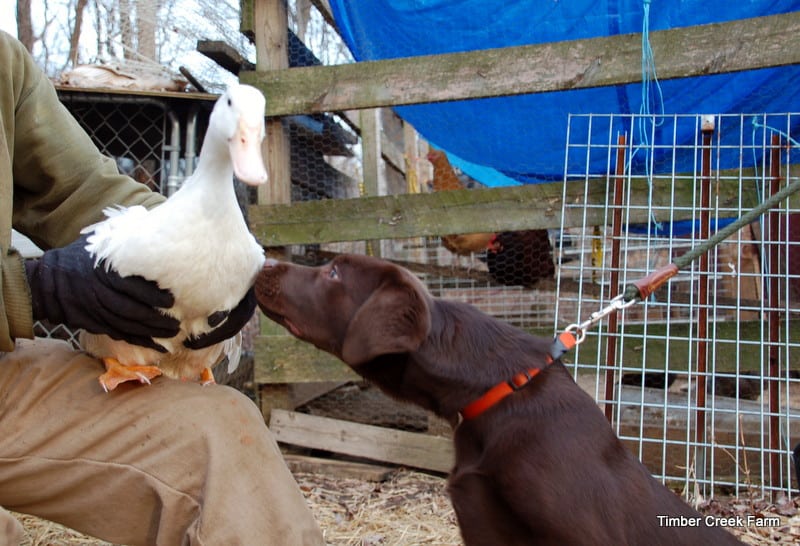 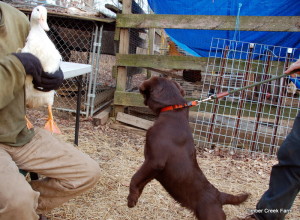 When we are on the farm, taking care of the animals, we can’t always keep a close eye on the dog. We need to get the dog to the point where he knows his job is to stay nearby and watch. Then we can go about carrying water, feed and handling any animals that need care, without also holding onto the dog leash.

Does every dog work out as a farm dog?

We have had a few dogs that we could not get to the point where they could run the farm while we took care of chores. Mostly these dogs were happy to stay home and just go to the farm  when we could keep an eye on them. This is a decision you may have to make if your dog just can not learn to calm down around the farm animals. Not all people work out as farmers either! Safety for all is the first consideration

There are a couple of farm animals that we absolutely did not let our Labrador go near. One was the beef cattle. The cows were so huge. For his safety, he was trained to stay out of the pastures with the cows. The other animal we trained Chief to stay away from was the hogs. Again, size was part of the reason. The other is that hogs can be very aggressive. We keep a couple of boars for breeding purpose and the risk was more than we felt comfortable with.

There are a couple of suggestions that I think will help you train your dog to be a farm dog.

Let me know how you trained your family dog to be a farm dog. Please leave your comments in the section below. 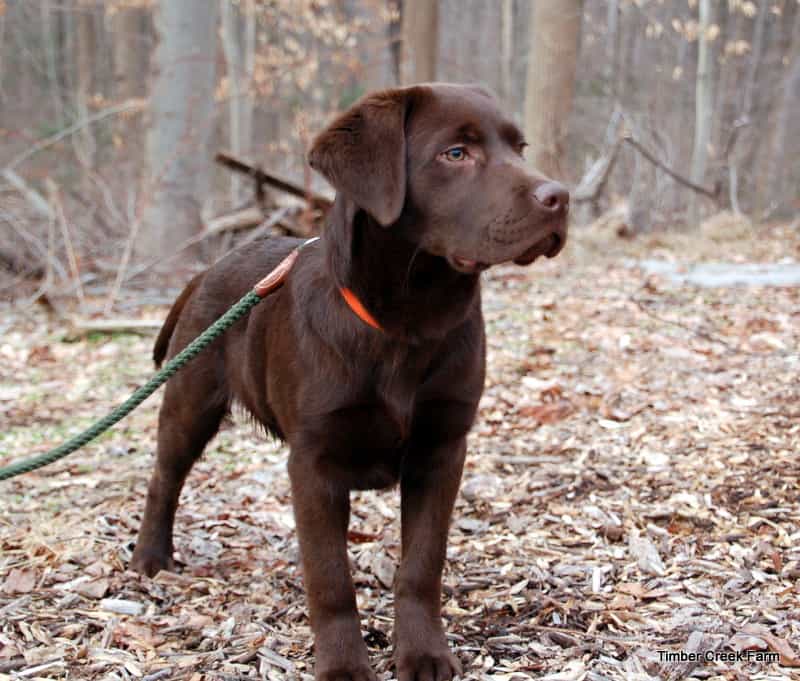 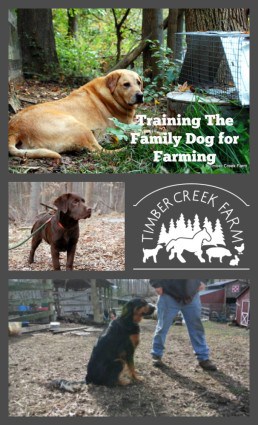 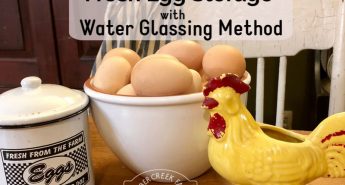 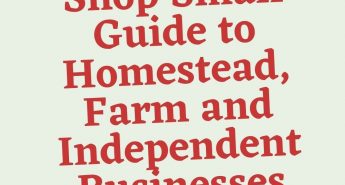 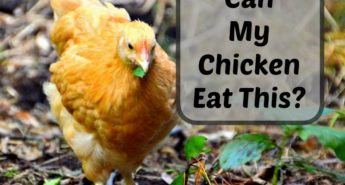