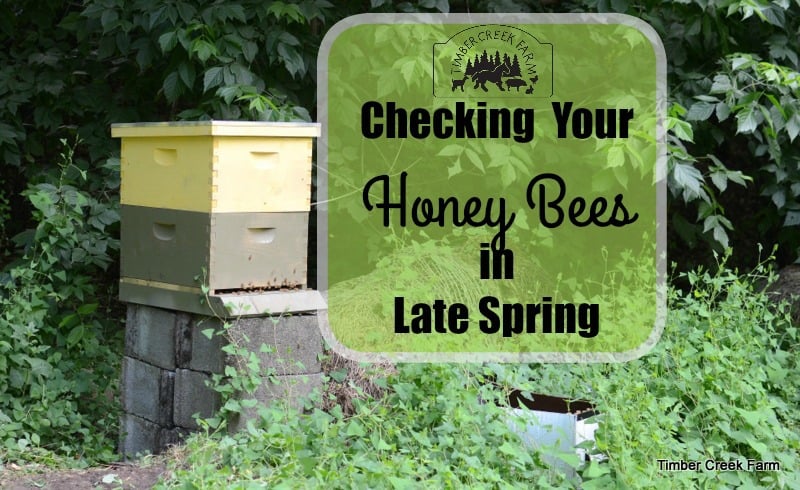 Honey bees in late spring need a hive check to ensure that the new hives are thriving.  No matter whether you start with a Nuc or a package with a queen, there are hives that do not do well.  The queen may have died. The weather could have been all wrong.  Often spring weather is unpredictable. If the early sources of pollen fail, the new hive may starve.  In short, it is recommended that we take the time to check on a new hive after the first couple of weeks.

What to Do While Checking the Honey Bees in Late Spring

When I picked up the new bee colony this spring, the beekeeper recommended feeding.  He must have said it three or four times. Our spring was odd as usual. Our springs are always odd, but never the same form of odd!  This year, we had an unusually rainy two months. The temperatures were much cooler than normal and everything was slow to grow and bloom.  And then it became unseasonably hot!  One extreme to another is normal although a bit unsettling when trying to grow bees and gardens.

During the rainy days I was getting things ready for being away from the farm for at least a week.  I tried to find the time to check on the bees but it didn’t happen.   I did not have sugar syrup made to feed the bees either.  When I observed the bees from afar, I saw what looked to be normal hive activity.
When I left on the trip, I had not checked the hive or provided any extra food for the bees.  Once again I felt that I was failing as a beekeeper.  I really needed to check the honey bees in late spring, and it was almost summer. 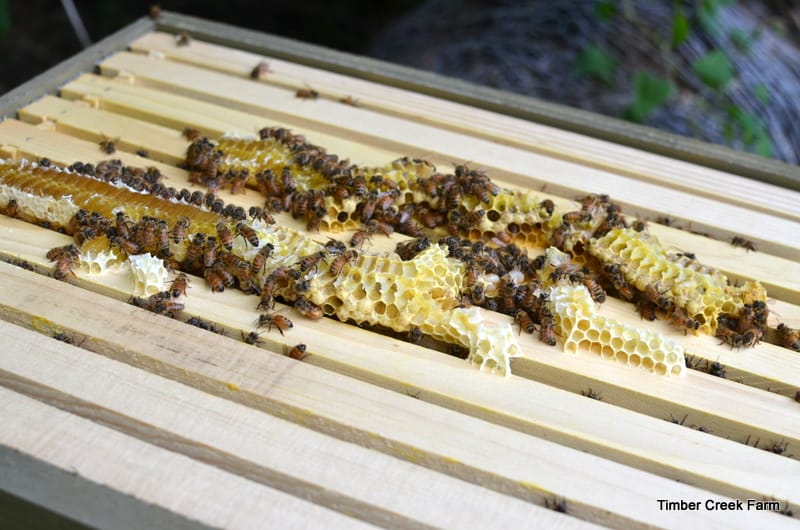 Returning home two weeks later, the bees were on my mind.  Checking the honey bees in late spring was the first thing I did.  First, putting on my protective clothing and gathering up the beekeeping supplies.  I have my bee keeping tools in a bucket that makes it easy to carry everything to the hive. I like to carry my camera along too, for documenting the hive progress. The camera also goes in the bucket.

Why I use a Smoker

I chose to use a smoker while checking the honey bees in late spring, for a couple of reasons.  One, the bees aren’t used to me yet.  I don’t know if that even happens, but the only time we have met was day one.  I added the Nuc frames to the hive and closed up the hive!  Two, it was getting late in the day and the bees would be heading back into the hive.  This can be a time of more aggressive behavior.  The smoker can help calm or distract the bees. 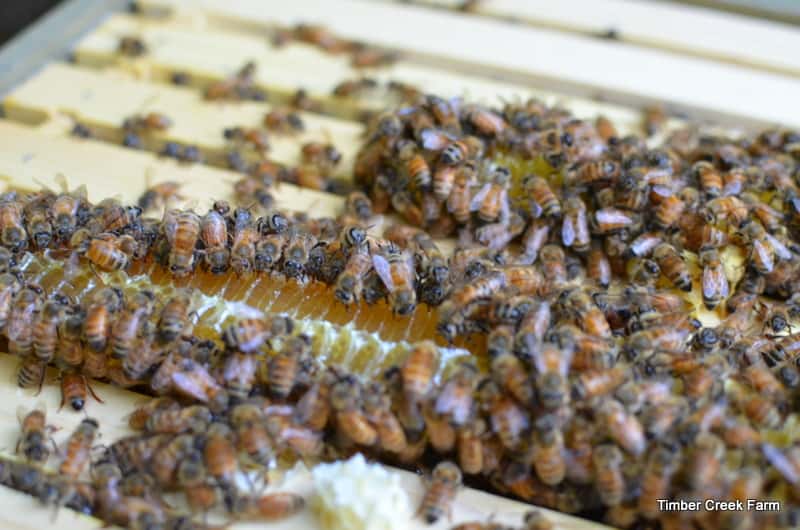 As I removed the top cover  I immediately noticed that a huge population explosion had occurred since starting the hive. Bees were everywhere, spilling from the top of the hive, and under the inner cover.  Not only bees, but comb was being built on top of the frames and on the inner cover. Lots of comb was being built and some comb also had honey in it.

I was pretty sure that I knew what had to be done, but I checked with my local beekeepers to be certain.  This is another good reason for taking a camera into the hive with you.  I was able to show what the inside of my hive looked like and get reliable advice.  It was time to add the second box, or super and ten more frames, to the hive.  The bees had filled out most of the frames with comb.  The comb being built on the top of the frames and on the cover would have to be scrapped off using a hive tool.  It can be left nearby for the bees to eat. 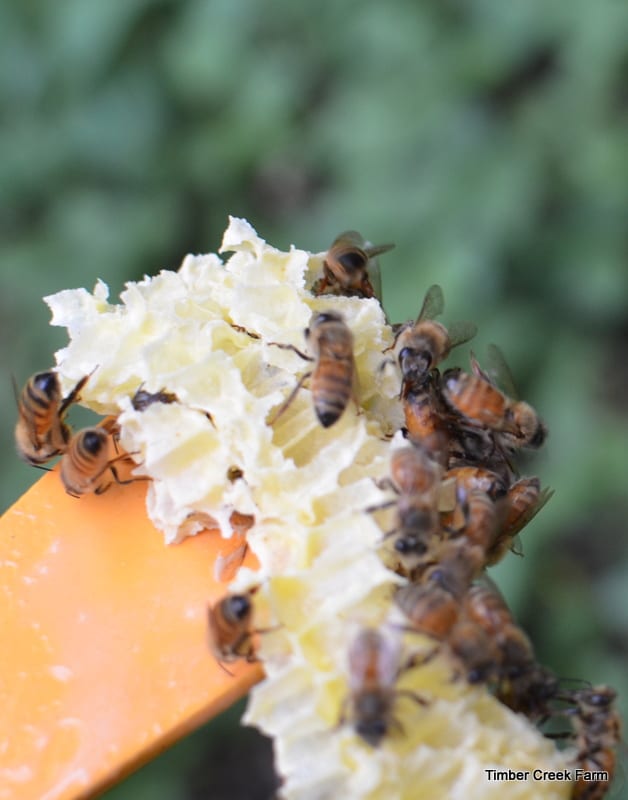 The next day I suited up again, (don’t you wonder about the beekeepers who only wear a hood?) and took the super with ten frames ready for the bees to build up the hive.  While in the hive, I scraped the extra comb off with the frame tool.   The bees seemed pretty upset with me for removing the comb so I worked quickly.  I sure don’t want to stress out 40,000 of my honey making friends!  I didn’t look for the queen bee this time.  It is obvious at this point that she is happily breeding and sitting on her throne.

The reason to do an inspection is to verify the health of the bees and the colony.  If you see an active beehive full of drones and workers, and notice eggs in the cells of the comb, your hive is doing well.  The Queen Bee usually stays in the center of the hive, but not always.  Looking for and seeing brood confirms the presence of a healthy queen, even if you don’t see her. 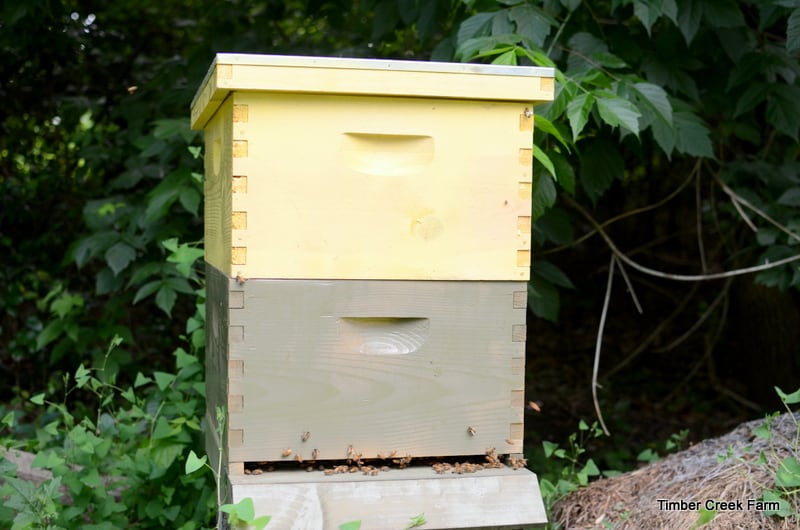 In addition to eggs, look at how the cells are arranged.  A healthy hive will have brood cells tightly packed. If you see cells capped but spread out all across the frame your queen bee might be older or not laying eggs,  The queen can get sick or old.  You might also notice nectar and pollen stored on the wax frames.
We have all probably heard of the term,  bee swarm.  There are actually signs in late spring that tell a beekeeper the hive might be getting ready to swarm.  The presence of queen cells or cups is one sign of potential swarming. 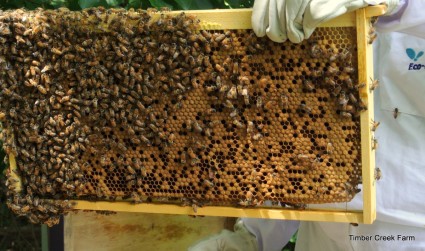 Can the Bees Get too Hot

Yes the bees can get too hot and you will notice what is called bearding on the outside of the hive if that happens.  Adding a bit of ventilation space under the lid will increase air flow throughout the hive. 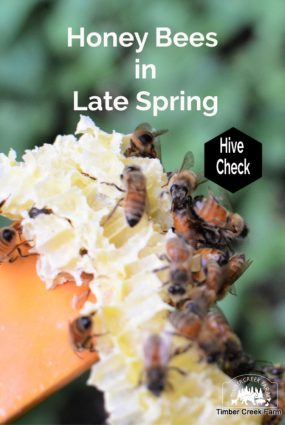 How Much Water Do Bees Need

When it’s hot the bees will gather close to a gallon of water a day.  They will fly miles to retrieve water so its a good idea to give them a shallow dish and something to float on while getting a drink.  Bees don’t like to get their feet wet!

How Often Should You Check The Hive?

If you see normal activity around the hive once or twice a month may be enough checking.  If activity seems to be less than normal for your hive, it would be important to get in there and take a look. The sooner you find a problem the higher chance you have of correcting the issue. 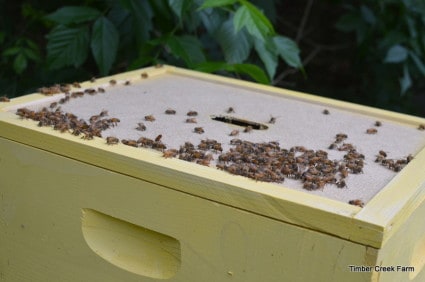 Bees are hardworking members of our sustainable farm.  We are looking forward to that first spoonful of honey from a healthy bee colony right here at home.
For more on the subject of pollinators and the plants that attract and feed them take a look at these blog posts
How to Plant a Butterfly Garden
Meet the Pollinators
If you enjoyed this post please consider saving it to your pinterest boards!  Thanks so much! 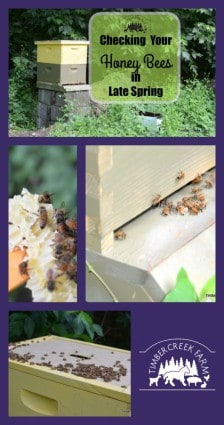 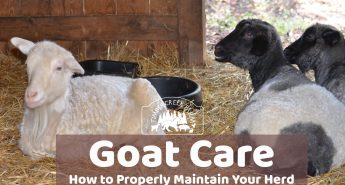 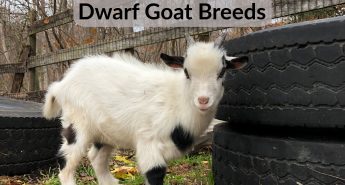