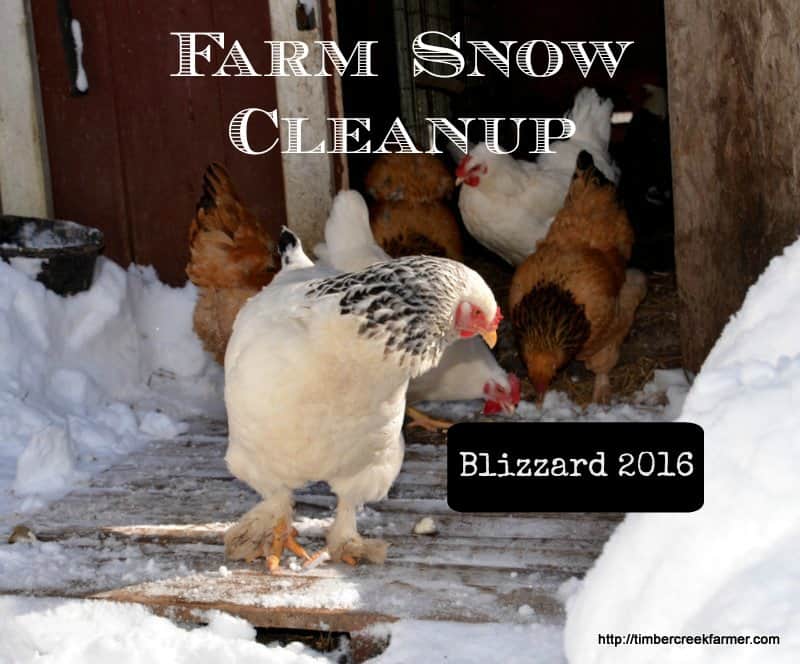 How We Return to Normal Farm Life after the Blizzard

The day dawned sunny and bright against the bright white blanket of snow. It was time to let the animals out of their cozy stalls and coops. It was time to begin farm snow cleanup. I felt like we really got off easy with this mega storm. The power stayed on in our area, and despite the large amount of snow, and high winds, no trees came down crushing our buildings. So really, all the best case scenario! Still, two feet of snow blocked access to the animal pens and made walking difficult. The drifts were above my knees and I fall enough on stable ground! By the end of day 1, I had lost count of how many times I went down into a drift and had to climb back out. Day two proved a challenge too but I didn’t fall as many times. 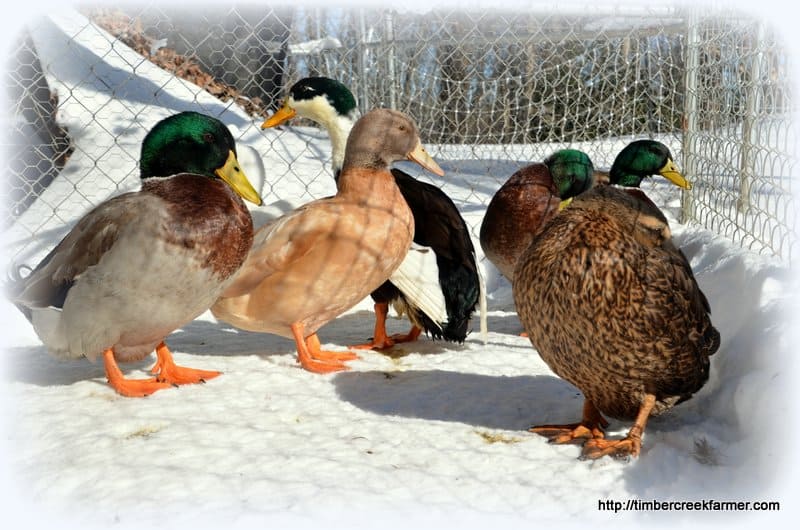 I got started early. The animals had been inside their homes since 4 pm on Friday when the storm began. I made it down to the barns one time during the storm. They were fine and had plenty of water. Then the storm intensified again, but I knew they were content with everything they needed. The temperatures did not get too low and  the water only had a thin skim of ice on it by morning. 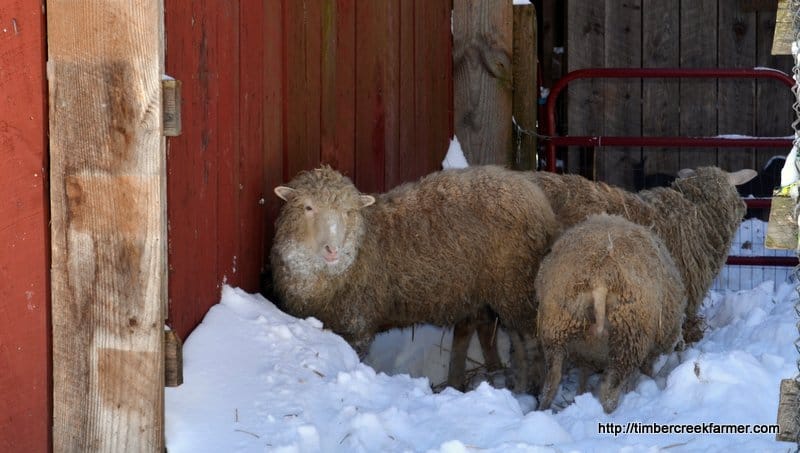 Animals have a different way of processing time than we do. When left inside with more darkness than normal, they sleep more and eat less. So, it was important to get them out into the light and start them back to routine. Since animals thrive on routine, it is advisable to get the farm snow cleanup done and get the routine returned to normal. This will help them recover from the day or two of lower feed intake.

The rabbit habitat was the worst of the upper pens to uncover and dig out. Mostly this was because the pens are shorter and required that I crawl in after digging out on one side, then continue to dig from the other side. The roof on one area of the rabbit habitat needed to be shoveled off too. It had so much snow on it that it was beginning to crack in the middle. 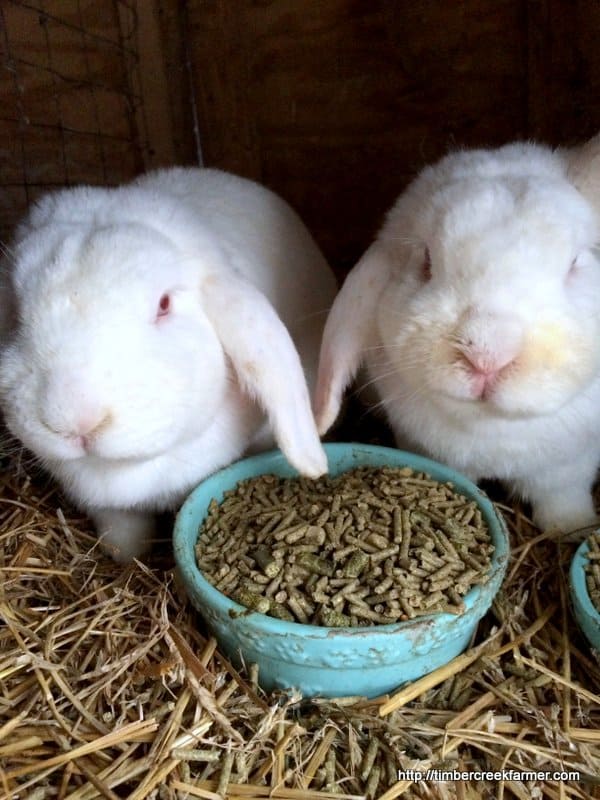 Chickens are Not Fans of Snow

The chickens only came out as far as the pallet porch in front of their coop. I love this photo of Ms. Featherfoot and Teeny hanging out together. I shoveled off the porch and a pathway for me to reach the coop. I will continue to work on clearing more space for the chickens to come outside. 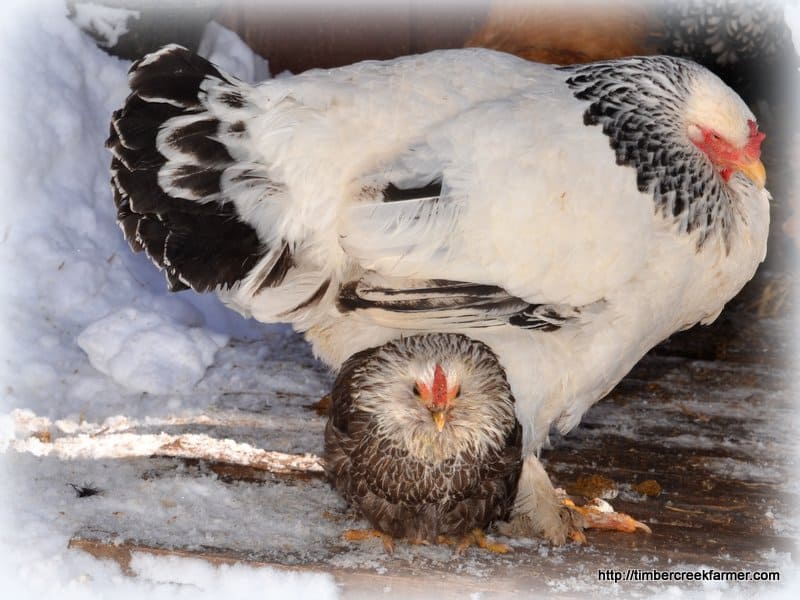 Ducks are the weather champs. Rain, snow, or ice, the ducks just want to be outside. They greet the day early and love to hit the “hot tub” for an early morning swim and grooming. However, the pool was buried under two feet of snow! You can’t even see where it is. I filled the large rubber feed tub with water and told them to take turns. Estelle took the first turn and stayed in the tub for quite a while, as the other ducks waited and quacked at her to hurry up. 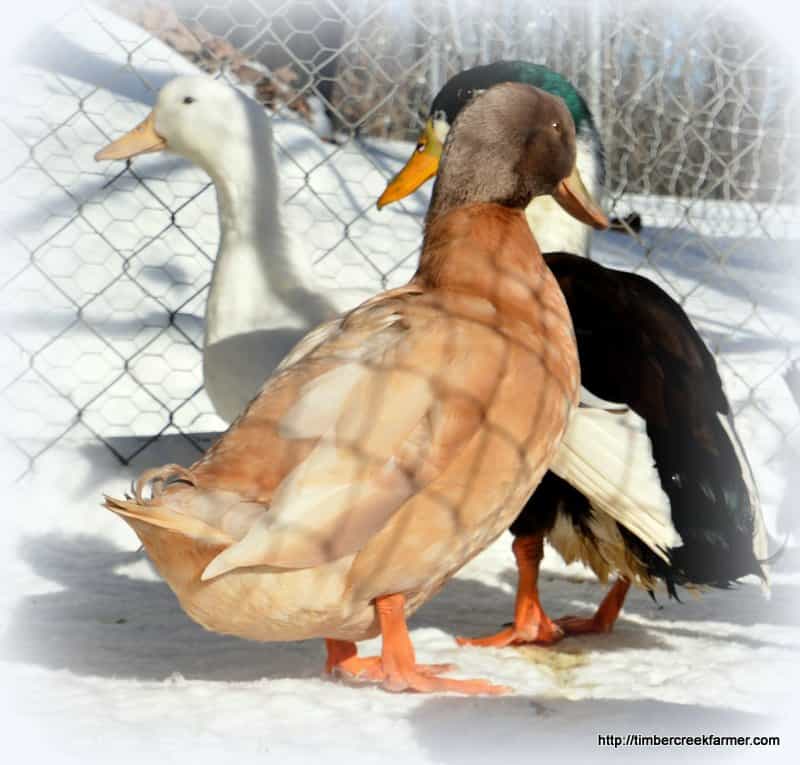 Down at the barn, it was time to let the sheep come out and explore the snow. There was a LOT of snow piled up in their paddock. 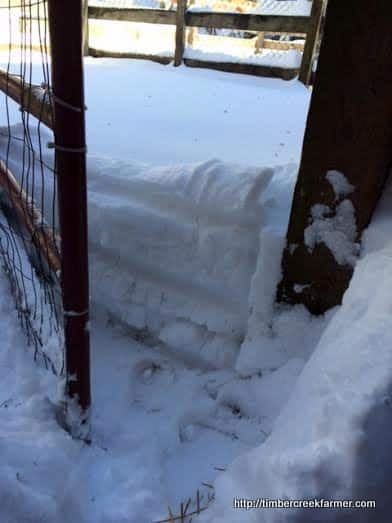 I doubted they would want to come out for a walk around the farm. They thought the crazy white stuff was rather scary. I dug out the opening to the barn from the outside, then went in and removed the gate holding the sheep inside. Joey went out and came back in. Annie gave it a try too but then turned around and went back to munching hay in the feeder. Bella stuck her nose into the snow bank and came up with a cute face full of snow. 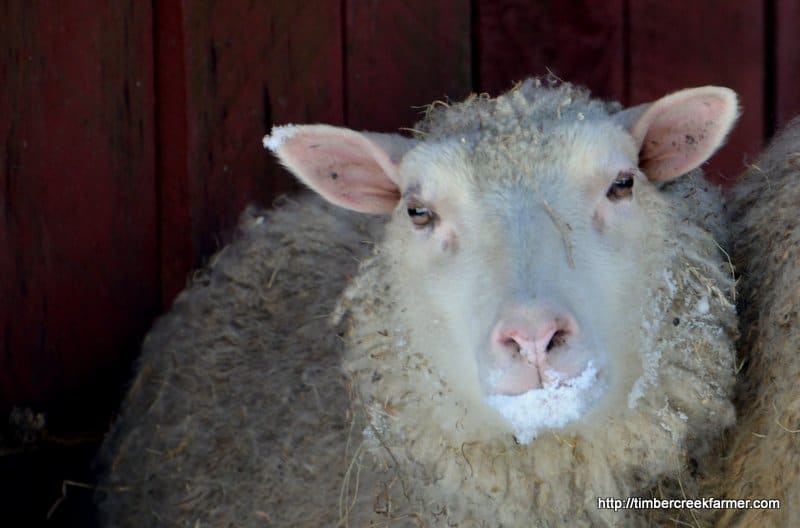 The goats were not blocked in, but they won’t go outside if it is cold wet or snowy. And this time was no different. I heard them mumble something about going out when May arrives. 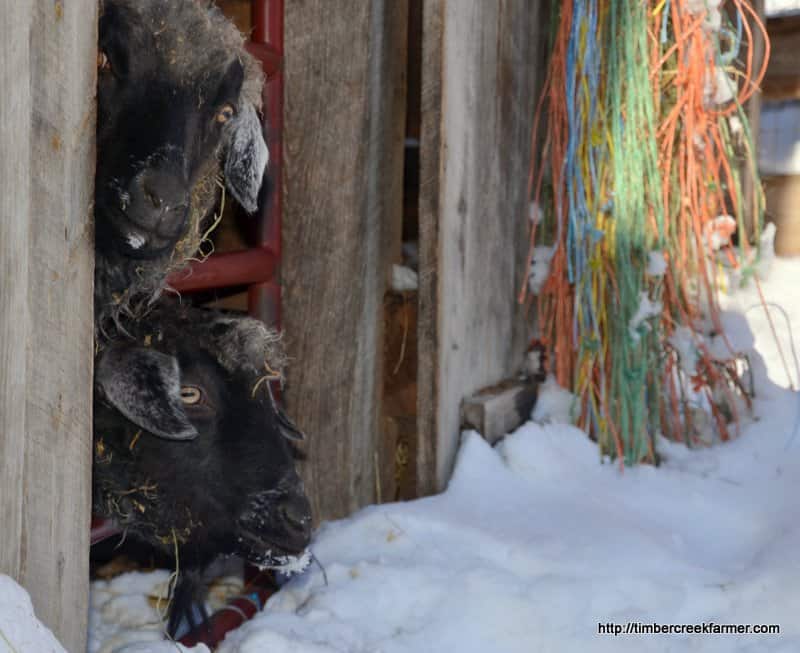 The young pigs haven’t been out much either. They sure let me know how they felt about things! 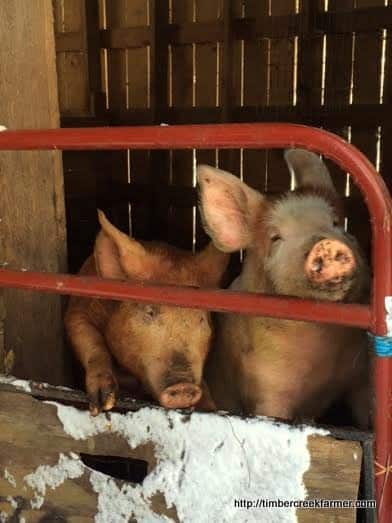 Returning to Routine after the Farm Snow Cleanup

Was this a hard time? Not really. I am grateful that we are able to take care of our animals in all types of weather situations. I am grateful that all the animals did very well during the storm. The state is still recovering but tomorrow, for us, should be business as usual after the farm snow cleanup. 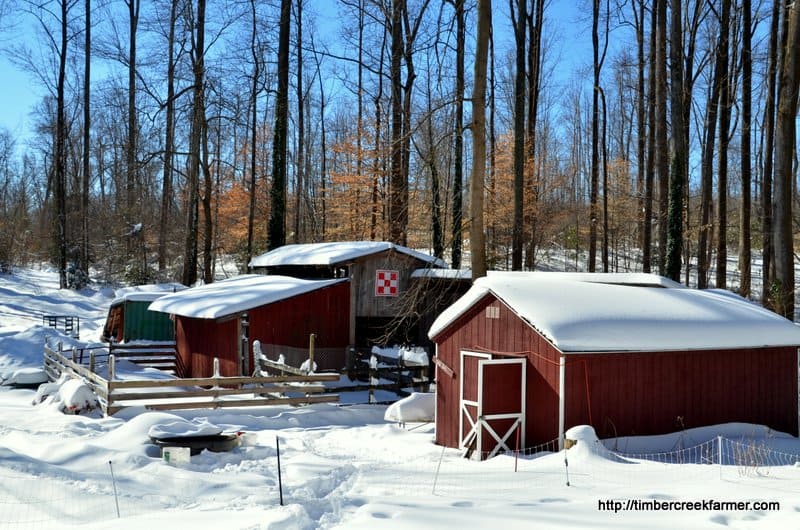 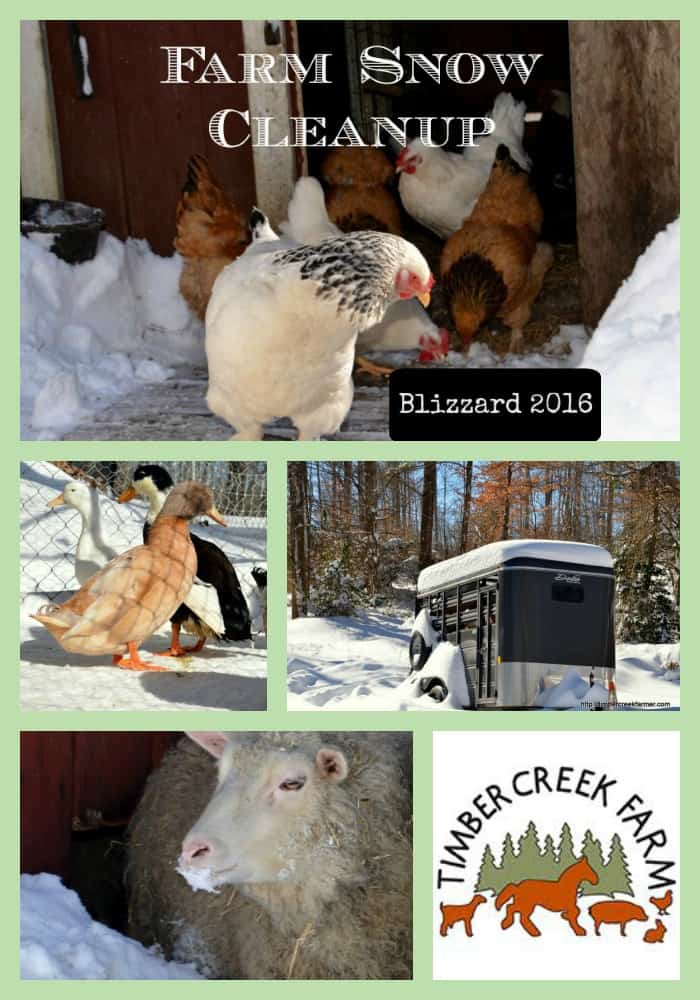 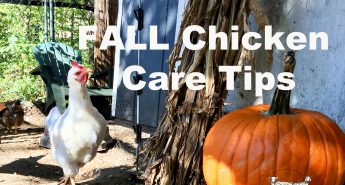 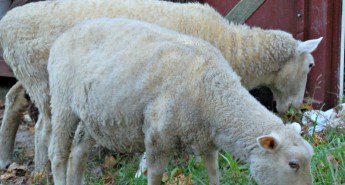 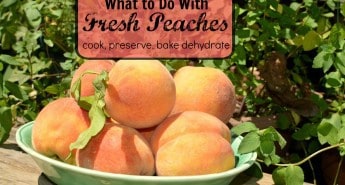 Are you decorating for Autumn? 🍁🍁🍁 In ord

What do you mean “it’s Saturday?” I guess he

Diving into the weekend like this piggy. Just goin

Mariah and Lily welcome you back to the weekday po